Classical point-and-click adventure are out. They are the dinosaurs of gaming and no one ever plays them anymore, right? Well … kind of. Point-and click-adventures had their 5 minutes of fame some 30 years ago, when classics like Monkey Island, Zack McCracken, and Kings Quest entertained a whole generation of gamers. Since then adventure games have evolved: more user-friendly and easy to use user interface, hi-res graphics, etc. You get the idea.

What is Thimbleweed Park?

Ron Gilbert one of the famed creators of beloved classics like Monkey Island wants you to forget all that. With Thimbleweed Park he takes you back in time to when all good adventure games still had verb commands and were all about pixel hunting. If not for the missing LucasArts logo you would think you’re playing a sequel (or prequel) to Maniac Mansion. 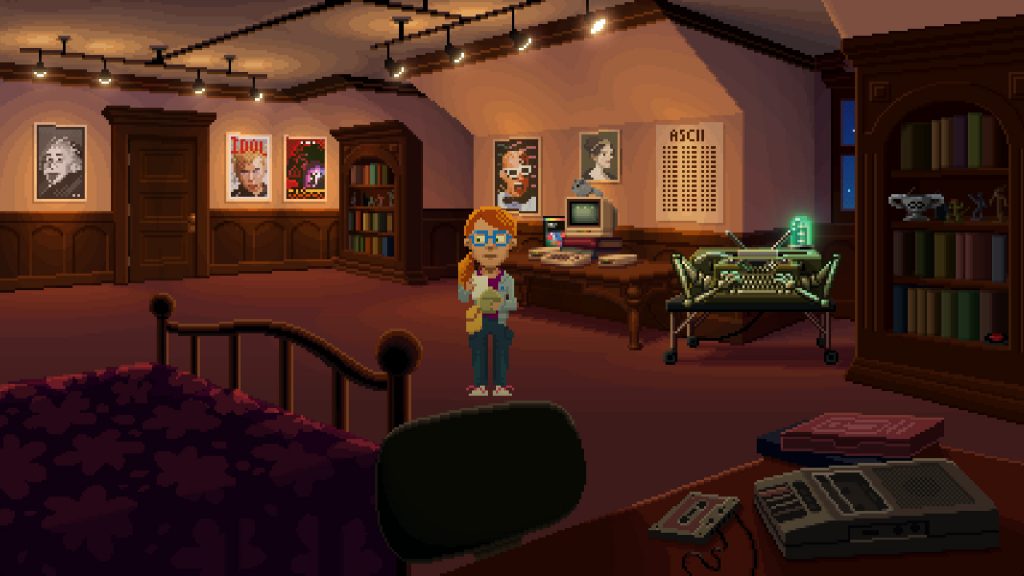 Thimbleweed Park is a Kickstarter backed point-and-click adventure that comes with the same wacky and sometimes over the top humor as his predecessors. It isn’t a comedy though: You are there to solve a murder or two. Enter Agent Angela Ray and Antonio Reyes – two Mulder and Scully-like FBI agents who both have a hidden agenda. Sadly the two feel kind of underwhelming as far as playable characters go. This may partly be accounted to the sheer amount of playable characters (five in total) but also because they barely ever have to or even can interact with each other and if they do they don’t have a lot to say. For the first two hours I almost exclusively played with one of them, while ignoring the other completely. Most, if not all, dialogues in the first part are interchangeable as well, which adds to the disappointment. If you are an old time adventure gamer like I am, you’d expected a bit more.

How does it play?

As the story progresses you get introduced to the rest of the playable characters via flashbacks: Ransome, the abusive cursing clown, Delores, the girl who just wants to work at MmucasFlem (yes, it’s a play on LucasFilm – you got it!) and program adventure games, and Delores’ father whose name I have forgotten, who wants nothing more than to rebuild the burnt down pillow factory of Thimbleweed Park.

The well-paced story with its different subplots is engaging and every time I thought I’d figured out what was really happening in Thimbleweed Park, I got surprised yet again. You find out soon enough that the murder is only part of a bigger more sinister story of death, betrayal, curses, and … but no, that would be a spoiler. 😉

As in most adventures Thimbleweed Park is full of puzzles and while some were definitely a bit harder to solve they were not as far stretched and illogic as in other famous point-and-click games I’ve played (yes, i’m looking at you, Sam & Max!). It gets a bit harder in the second part of the game when you have to navigate all five characters and figure out who needs what to solve which puzzle – but even then it shouldn’t take too long to make at least some kind of progress. 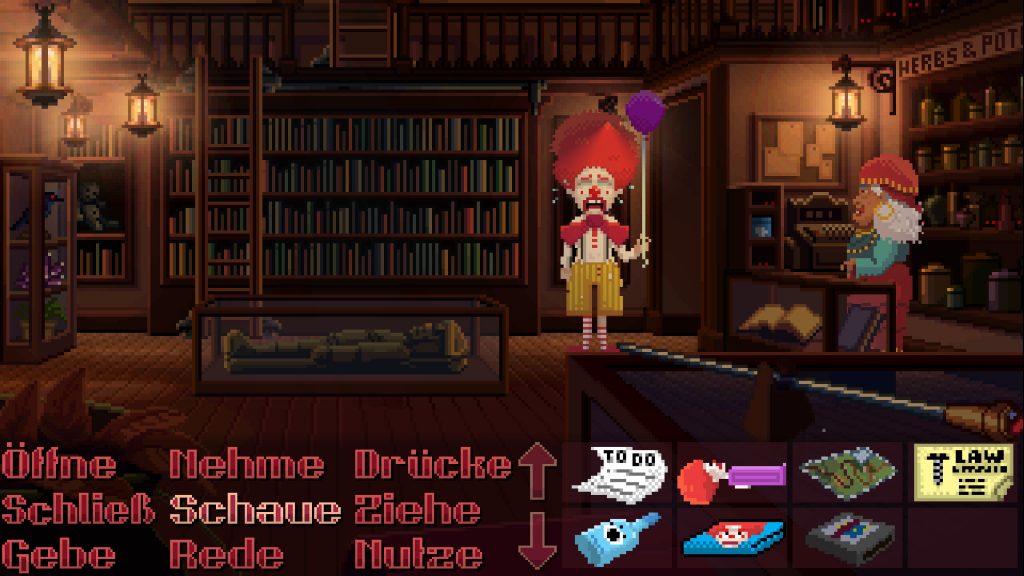 All in all it took me a whole weekend with some 18 hours to finish the game, get almost all Steam achievements, and excessively look for specks of dust. Because if you have to hunt pixels anyway, make it as ridiculous as possible, right?

Should you buy it?

If you are a point-and-click adventure games fan, Thimbleweed Park is a must. Not only is the story enjoyable but it also makes sure to drop references to old classics wherever it can, be it a certain chainsaw (will you actually find the gas for it this time?), Chuck the plant, or the thousands of references to Monkey Island.  The graphics are beautiful for an old-school like pixel game and the riddles – while sometimes a bit harder – are never unsolvable or completely illogic. Thanks to the “easy” mode that players can choose in the beginning the game shouldn’t be too hard for newcomers either, though they might get turned off by the retro graphics.

Thimbleweed Park is available on Steam for €19,99.