Apple announced its new technology stack in 2019 – a breakthrough in software development and an opportunity for us to rethink our Mac application. Now, we can share our journey and in-depth experience with Apple’s latest technology. We are going to talk about what it means to develop a security application from scratch and how we created a native Mac experience for our leading security software.

It all began with Apple’s Worldwide Developers Conference (WWDC) in June 2019, when Apple introduced major upgrades for Swift, the company’s home-grown programming language, a new interface builder called SwiftUI, and a powerful software framework called Combine. Avira’s developers attending the event quickly realized that this was a game-changer not only for us but for the entire developer community building applications for Apple devices.

This got us thinking: How will our development setup look like? How can we make sure our technology provides the best security on Mac? How well does our current solution fit into the new Mac ecosystem? It felt like a breath of fresh air for our development team. And it marked an important milestone for us, as we had to make a decision that would simultaneously change our scope, team, and product: Should we improve our existing Mac application or rebuild the app entirely? After careful consideration, we decided to take the bold step of rebuilding our Mac app from scratch. No matter how much effort and resources it would take, we were committed to providing the best solution for our users.

The best all-in-one solution for security, privacy, and performance

Our journey started with reevaluating all the building blocks, from UI to software frameworks. We really wanted to build our new Avira Free Security app for Mac with all the functionalities that users would enjoy, providing at the same time a seamless experience across devices. Avira has been developing cross-platform security software for a long time, and this was our chance to make the user experience consistent across all platforms: Mac, Windows, iOS, and Android.

In what follows, we would like to share our experience with Apple’s latest technology stack and answer the questions we have been asking ourselves throughout our journey. But first, a quick intro into Apple’s tech stack.

What is Apple’s new technology stack?

In general, a technology stack refers to the set of technologies, software, and tools that are used to develop and deploy websites, apps, and other digital products. Apple provides cutting-edge technologies like Swift, Swift UI, Combine, a variety of system extensions, and more advanced elements. At WWDC 2019, Apple announced crucial updates to:

What are the benefits of using Apple’s new stack?

There are many advantages to building apps with Apple’s own technologies. Running an app that was not written in Swift on a device powered by one of Apple’s operating systems causes difficulties. Swift’s syntax rules make it easier for developers to read and understand code, making collaboration between developers smooth. It helps eliminate unsafe code and makes apps run fast thanks to the high-performance LLVM compiler. Combining the Swift programming language with SwiftUI, developers can easily build and test user interfaces across all Apple platforms, for all kinds of Apple devices. Overall, building apps is a lot more fun and less prone to errors.

For Avira, it means using cutting-edge technology to create the best possible software. Our developers can focus on building features that make a difference for users instead of worrying about compatibility issues between new devices running the latest Apple OS and apps built on an old Unix stack. We are pioneers of this novel tech role, and that is exciting. 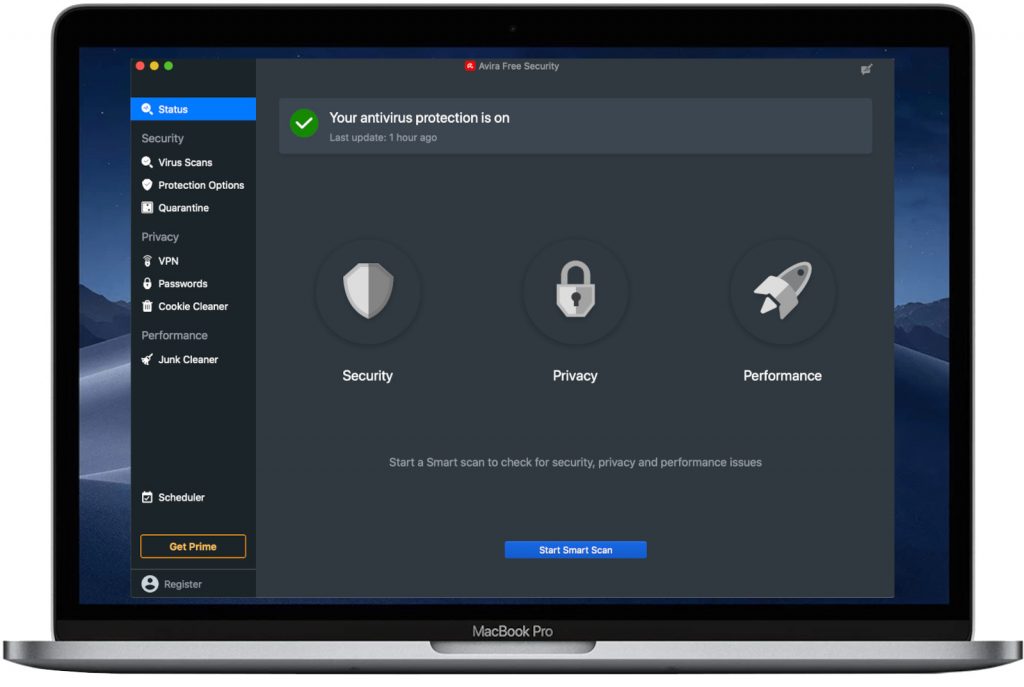 What was our experience throughout the development process?

Overall, it is quite exciting to work with Apple’s new tech stack. There are a lot of things that simply make sense and feel revolutionary. Writing and understanding code is a lot easier – for experts and beginners. We believe that it makes our application lighter, faster, and more secure. But building something from scratch with new technology, as opposed to upgrading an existing product within a familiar setup, is a challenge. Everyone in the development team needs to be on the same page, which means many hours of training.

“Actually, we started benefiting from the decision to move to Apple’s tech even prior to the release of Avira Security for Mac. For example, looking back into the past, adapting our Antivirus for Mac to each consecutive incarnation of macOS has been an effort from a development standpoint. It consumed quite some resources that otherwise could have been poured into the development of new features. And so, we started building the new product when Big Sur didn’t even have a name and was still referred to as 10.16, not even macOS 11, preparing ourselves to invest in making it Big Sur compatible when the time comes. Well, to the pleasing surprise of ours, when it was here, we have tested it out and… it just worked. We had almost nothing to change or adapt in Avira Security to make it compatible with Big Sur on day one. It has probably been the first time when we didn’t have to invest development efforts into adapting our Mac product for the latest macOS. And the same applies to reaching M1 (Apple Silicon) processors full compatibility – we are aiming to have it achieved in the near future.”

What is the business value of using Apple’s latest tech stack?

First, there are no license fees for third party frameworks. Apple is known for its free tech and free software updates. This is a huge business advantage. And since you’re developing within the Apple ecosystem, you can be sure that the technology will be further developed. Maintenance is easier, and there is a growing interest among developers in Apple’s freely accessible tech stack. This helps our recruitment team attract the most talented developers.

The adoption of the new stack also opens many opportunities for our OEM business. Avira’s technologies are integrated into security solutions provided by security vendors, service providers, and device manufacturers worldwide. In the near future, our real-time protection stack will become available to external partners, enabling them to offer the best protection for their clients.

What are the advantages of Avira Free Security for Mac?

Avira Free Security for Mac is built entirely with Apple’s latest tech stack. This makes it a powerful, fast, and future-proof security application that runs perfectly on macOS. With just one click, it scans your entire Mac for security, privacy, and performance issues. By being on par with Apple, we can react extremely fast to market and technology changes.

We believe in Apple’s technology stack. We had to overcome many barriers, and it wasn’t easy to drop what we had and start from scratch. But being in a pioneering role, we are confident it was the right decision. The result is the 2021 edition of Avira Free Security for Mac.

Get Avira Free Security for Mac