On one hand, this is completely logical. Making odd faces with Snapchat is certainly more amusing than memorizing the Periodic Table and various properties of the elements. But on the other hand, is playing with Snapchat – or other, even more fascinating games – really what a child should be doing at school? Could unfettered access to games and social media be doing a serious disservice to children in the short, medium, or long-term?

Studies on what children actually do with their smartphones and when they do these activities are extremely limited. Take a look at the title of this Statista survey: Most popular activities performed weekly by children on internet-enabled smartphones in Finland in June 2015 (according to their parents). What I really want is a study that contrasts what the parent thought and the child actually did.

But, I’m a parent, and I already have a good idea what’s going on: They are doing social multitasking – flipping between music, games, messaging apps, and the classwork in front of them – and they are doing a lot of it.
For parents, smartphones can be both a blessing and a curse. We can (usually) communicate with children and keep tabs on where they are. But, this can be (over balanced) by the distractions from games and social media. 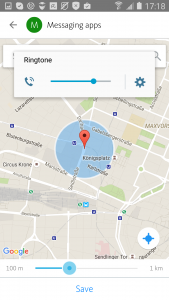 Asking a child to turn their phone off at school is an exercise in aggravation. They either A) forget to either turn the phone or the ringer off, or they B) turn it off, but forget to turn it back on after class so it is impossible to reach them. And Option A and B both go against the purpose of having a smartphone in the first place.
But there is an alternative.

With AppLock+, a new app from Avira, users can organize their apps and put a Geo Lock on specific categories. The Geo Lock restricts user access down to a radius of 100 meters.

In practical terms, this solves the above problem. Child goes to school and the identified apps, for example in the chatting and games categories, are automatically turned off at the front door. And, the key phone attributes of sending and receiving calls are left on.

Time for class to start.