Today is the day: Nintendo’s latest console has been released, the Nintendo Switch.  Since there are quite a few gamers in our Avira offices, some of whom were crazy enough to actually get the console immediately, we thought it might be nice to share the joy and give you a quick first impression as we unpacked it and started it up for the first time. For more in-depth reviews take a look at Kotaku or Polygon who got preview versions of the Nintendo Switch.

If you haven’t heard of the Switch yet, it’s Nintendo’s newest home console (the last one being the Wii U) and the big idea behind it is that you can play it everywhere. That’s right: It has a docking station for home use and a tablet with two detachable “Joy-Con” controllers for, well, everywhere else – be it on the train, during boring meetings (just kidding – don’t play with you Switch during meetings!), or while being on the plane. The switch between handheld and television mode is promised to be hassle-free.

So let’s start. The first impression when holding the box is that it is way smaller and lighter than expected, especially when comparing it to other consoles like the PlayStation 4 or Xbox One.  Considering that you might want to take the tablet part with you on the train or plane it is a good thing though – because who wants to drag around a way too heavy handheld device?

Once opened the contents of the box look even smaller. The 6’’ tablet almost looks lost and even the Joy-Cons are smaller than expected. 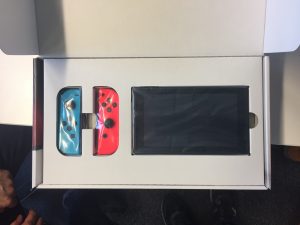 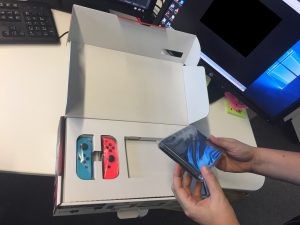 Beside the tablet and the controller the box also includes all needed cables (of course), the docking station, and the connector to make a joypad out of the Joy-Cons.

Apropos Joy-Cons: They have so many uses it’s almost scary! You can either use them with the tablet, or as a “normal” joypad – or just as two teeny-tiny separate controllers. If you plan on using them separately you should consider adding the slide-on straps that also make sure that the top buttons are larger and easier to press. I am not sure I’ll want to use it in that mode though, because they are really small even for my normal sized hands. 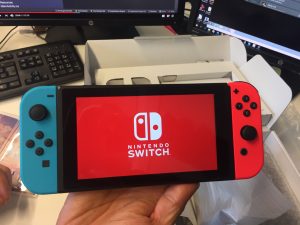 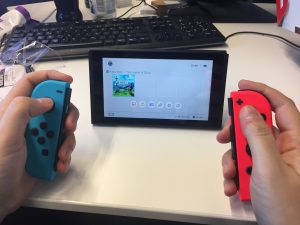 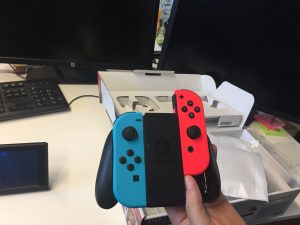 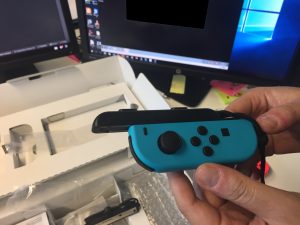 Setup is easy, no matter how you intend to play. Add the Joy-Cons to the tablet and start the Switch up to use it as a handheld.  If you want to play games on your TV plug the docking station into your TV via HDMI, put the tablet into the dock and make sure it has power. You might need to pair the controller as well, but that’s basically it. Easy as pie, right?

What use is a new console if you don’t at least take a quick look at the user interface and the game? Admit it – you are just as curious as we! 😉 The screen of the tablet looks really crisp and the touch screen is responsive. Everything worked fine out of the box without any patching needed which is a really nice experience.

One of the drawbacks is the game availability: at launch there are not a great many available and even Zelda – as hyped as it is with all its stellar reviews – is not a Nintendo Switch exclusive but rather a Wii U port.  Other games will follow soon though. Oh by the way, the games are just as small as you’d expect for a tiny console! 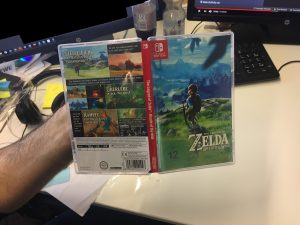 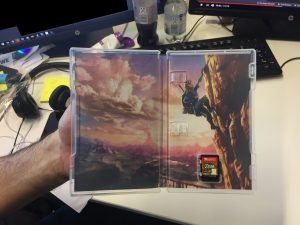 And … that’s it! We hope you enjoyed our first impression of the Nintendo Switch. It is available for 329€ in Germany (where it is sold out more often than not at the moment) and $299 in the US. Feel free to let us know what you think of the console and if you would buy it below in the comments!