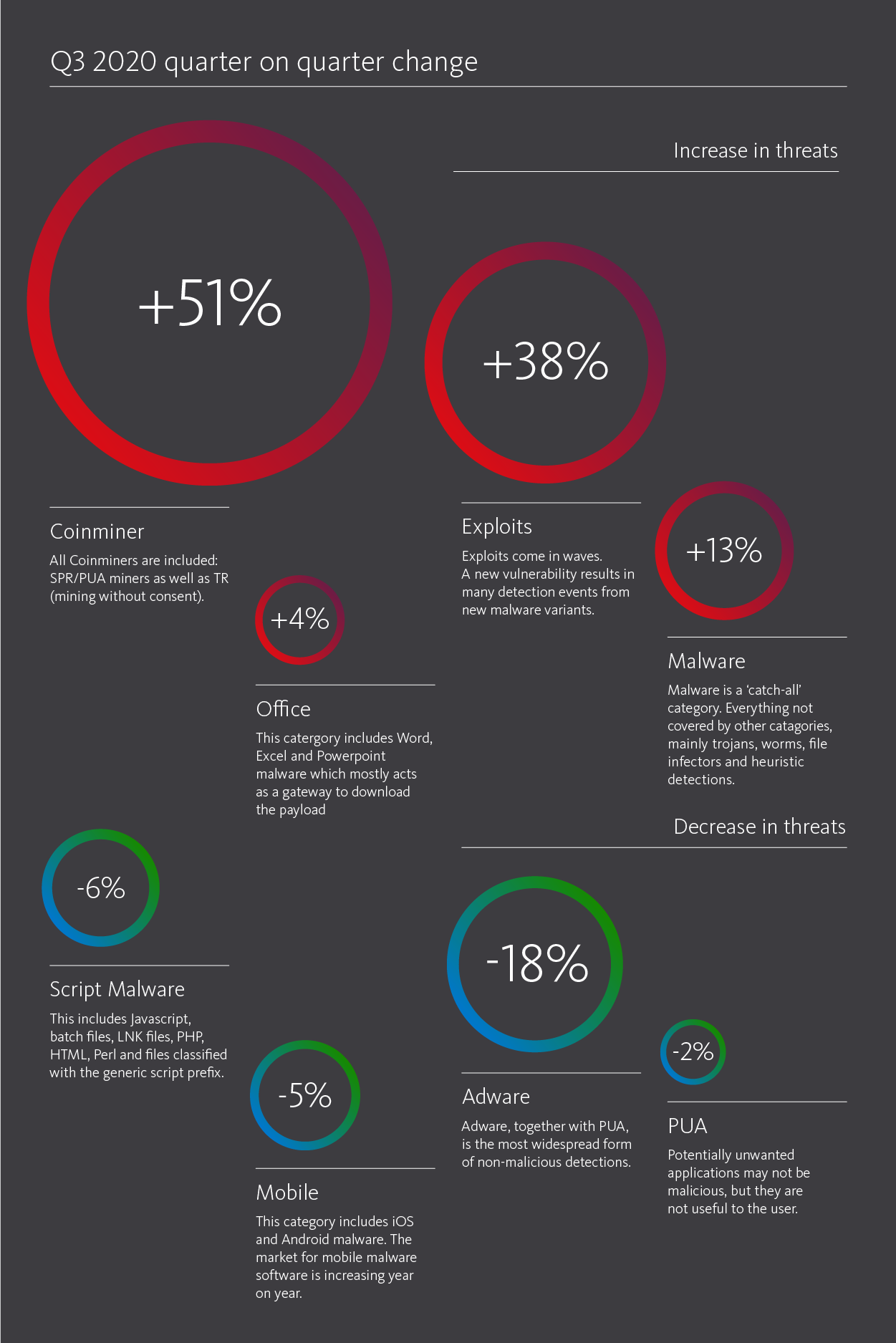 In our Q3 malware threat report, we see similar trends overall to Q2 2020. While the overall detection number has not changed dramatically, we see a shift in how this number is put together.

We identified a significant rise of up to 50% in the number of traditional malware, exploit based threats, and coinminer. However, the adware/PUA, mobile, and script-based threats see a decline compared to the last quarter. General malware attacks surged and this category contains the most dangerous threats found in the wild. In this report, we will discuss each threat category in detail and look at their most common forms.

Portable Executable (or PE) is commonly used to describe binary executables within the Windows OS. PE files include .exe, .dll, and .scr, and are the most commonly leveraged data structures in malware attacks.

In Q3 2020, PE malware represented the largest category of detected threats. Within this category, we see that the vast majority of attacks can be attributed to trojans and file infectors, PUA, and adware. 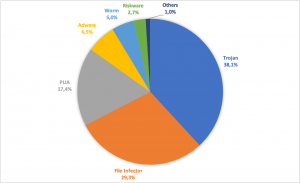 The chart below shows that threats have increased their attack-volume, quarter-on-quarter. The Fareit trojan saw over 80 times more detections in Q3 compared to Q2. Note that we excluded threats with a volume of less than 2.500 in Q2.

Fareit is one of the most successful information stealers deployed in malspam campaigns. This family of trojans steal sensitive information such as website passwords and sends them to its backend servers. In 2020, it has been a continuous threat to the public health sector. It has also been associated with CVE-2017-11882, which is the top 10 most exploited vulnerabilities. Fareit usually steals info from:

It is usually bundled within the custom installer on various download portals, and generates traffic, displays ads & sponsored links. Some variants can also collect user-specific information with or without the user’s consent.

Nanocore is a RAT (Remote Access Trojan) that gives unauthorized access to a victim’s device. This RAT comes with a plugin mechanism to expand its functionality by developing additional features for other malicious actions. Major plugins include:

A newer version of Nanocore is more dangerous because of its advanced malicious features. There is an increase in the Nanocore activity, along with spam and phishing attacks associated with it.

Brontok is a family of mass-mailing e-mail malware. It spreads by sending a copy of itself as an attachment to e-mail addresses that it gathers from files on the infected system. It can also copy itself to detachable pen drives.

Emotet is considered to be the world’s largest malware botnet. Historically, the Emotet spam botnet has been linked to the distribution of banking trojans. Nowadays, it spreads spam to infect computers, including ransomware.

Recently, the Emotet net is dropping Trickbot to deliver ransomware and the Qakbot Trojan to steal banking credentials. It can hijack email chains to infect more users. Emotet also spreads with worm-like features via phishing email attachments or links that load a phishing attachment.

Non-PE threats, as the name suggests, are not Windows executables but other means of infecting machines. In this category, we have Office files, scripts, PDFs, and other exploits.

In the graph below, we can see the distribution of the common attack types for Non-PE. We observed fewer attacks than average in July in nearly every category. However, during August and September, the number of detections increased, leveling out the total average for the Q3 malware threat report.

Now let’s take a closer look at the most impactful malware we have seen in 2020. Emotet has been very strong this quarter, as seen in the graph below. In July, we received a little over 5.000 documents distributing the Emotet payload. The number increased by around 41% in August and 127% in September to over 12.000, indicating continued growth.

The malware distribution techniques are not very different, as seen in previous waves. Emotet uses obfuscated VBA code to connect to the URL to download the malicious payload. The first step in the infection flow is the e-mail message using social engineering techniques to camouflage the attached document’s malicious intent (below is an example).

In our last quarter report, we highlighted the comeback of an old technique using XLM macros. More recently, we’ve seen an influx of encrypted XF documents. In the chart below, we have included projections for October. 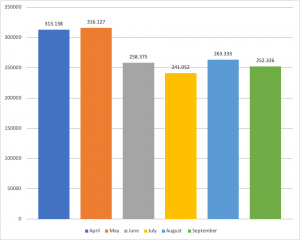 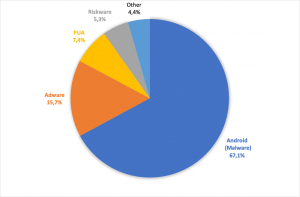 Out of the top ten Android families detected this quarter, four of them have the capability to display intrusive advertisements, with Android/Hiddad being the largest. It is worth noting that PUA makes the top five, and Android Lockers had a considerable presence in Q3. 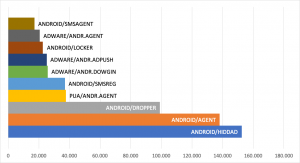 The applications containing Hiddad, an ad-distributing malware for Android, received several 5-star ratings from infected users. Unfortunately, not for the right reasons. Hiddad is often presented as a YouTube downloading app. It usually goes to the market on Google Play labeled as Tube mate or Snap Tube.

The applications detected as Droppers contain additional malicious apps within their payload. Droppers install the malicious payload on the infected device and, in most cases, run it automatically. Droppers are used in the second stage of the infection strategy (installing the real malicious component).

This generic detection covers any malicious behavior that cannot be accurately classified into a specific category.

On the global threat heat map, the most attacked countries were Germany, Iran, Brazil, India, and Indonesia, each with over 35.000 detection events. Compared to the previous quarter, the United States has advanced a few positions, now being in sixth place.

When it comes to threats prevented on macOS, our Q3 malware threat report shows that adware beats other categories. Adware is followed by script (includes JavaScript, PHP, HTML), Office (includes malware associated with Word, Excel, and PowerPoint), and exploits (malicious applications that exploit vulnerabilities in the system or in certain installed programs).

The ‘other’ category constitutes the remaining 35%. It includes HiddenEXT (a file that contains a malicious executable but it’s hidden by a harmless extension), phishing (a file that under false claims tries to persuade the user, for instance, to reveal personal information), and other types of detections such as Windows files that found their way into macOS environments. 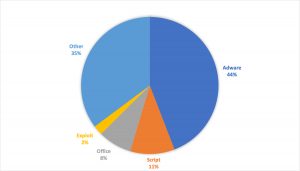 Now, let’s take a look at the prevalent threats infecting the macOS environment between Q2 and Q3. In this chart below, we omitted detections with less than 1.000 total detections in both quarters combined to eliminate low volume outliners.

This detection covers a file-encrypting ransomware family. It uses torrent websites as its infection vector and disguised as a crack for certain applications, such as Adobe Premiere or Microsoft Office.

This is a trojan family disguised as an installer for Adobe Flash Player, named “Flashback”. During installation, the malware will de-active network security features and install a dynamic loader library to inject code into the user’s applications. It was observed that the goal of this trojan is to form a botnet, which can be used for further malicious purposes.

This malware’s behavior is a combination of adware and browser hijackers. It displays misleading advertisements in the victim’s web browser. It forwards the traffic to its landing pages (these include “search.tapufind.com” and “tab.tapufind.com”, the first one replacing the user’s search engine). This adware causes privacy issues for the user because it tracks internet activity. This type of malware comes via installation bundles, spam, or Fake Adobe Flash Players updates.

This is an Unwanted Application (PUA) that claims to find discounts for cloud storage. It displays intrusive advertisements to the user and may steal personal data such as IP addresses and search queries. It comes via fake-free applications or installation bundles.

Looking at the threat heat map for OSX malware, we can see that OSX attacks are much more likely to occur in Europe and North America, with the most attacked countries being from these regions. Germany and the U.S alone make up for more than 50% of all registered macOS detections. 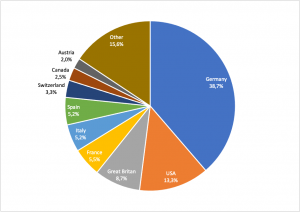 In the IoT landscape, we observed the usual Mirai, Gafgyt, and Hajime as the top 3 IoT malware families. However, Gafgyt has significantly increased its presence compared to the previous quarter. 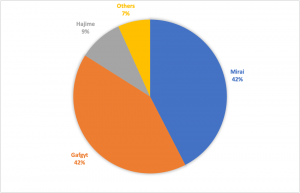 We’ve often looked at how Mirai has changed since its source code became public, and recent analysis of IoT attacks and malware trends show that Mirai has continues its evolution. The result is an increase in attacks using Mirai variants, as unskilled attackers create malicious botnets with relative ease.

Gafgyt malware first appeared in 2014. It started to exploit the known vulnerabilities in IoT devices, especially routers, to launch DDoS attacks like Mirai. Gafgyt’s famous variants are BASHLITE and Qbot. Each variant serves its purpose. The malware uses a scanner function usually to find open nodes facing the internet before exploiting vulnerabilities. It also kills other botnet families if found on devices.

Hajime appeared in late 2016 and is a botnet family. It has a propagation module that makes it an advanced and stealthy family that uses different techniques like brute-force attacks on device passwords to infect systems. It then takes several steps to conceal itself from the compromised victim. Thus, the device becomes part of the botnet. After that, it includes an attacking module to serve the purpose. Hajime is built on a peer-to-peer network for its C&C servers, unlike Mirai, which contains hardcoded C&C servers addresses.

Diving deeper, let’s look at the sub-families and behavior categorizations in IoT. With our dynamic IoT detection module, we can find new malware or malware families variants based on their behavior. As shown below, we have captured quite new malware families/variants through this module in Q3 2020.

IoT threats can also be categorized based on their network traffic. By design, IoT devices are very connectivity bound, so their traffic can tell you a lot about their purpose. This detection layer really helps in finding new exploits. By analyzing the traffic, we quickly detect attempted security exploitations. The notable exploits seen in this quarter are:

The network layer module also helps us detect malware families based on network or Command & Control communication behavior. For example:

They have all distinct ways of communicating with their Command & Control infrastructure. 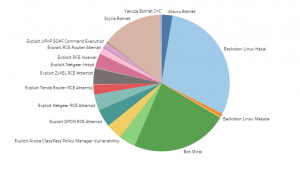 Learn more about new and novel malware, or automatically receive our Q4 malware threat report by subscribing to Avira Insights blog’s research section. Visit oem.avira.com to out how you can improve your own detection rates by using Avira’s anti-malware SDKs or threat intelligence.