Here is a summary:

“They really want to be sure that the user ‘properly’ gets infected,” pointed out Oscar Anduiza, malware analyst at Avira. “These directions are pretty much exactly 180 degrees off from what computer users should actually do.”

The readme.txt file is in standard, but slightly irregular German, but does not appear to be a machine translation. This indicates that the text has been written for the German mass-market but is probably also being distributed in other languages such as English.

“This gives the cybercriminals a second chance at a successful installation, especially after the AV has blocked the initial attempt. This is an interesting social engineering trick, especially as the downloader and malware are not especially sophisticated,” added Anduiza. 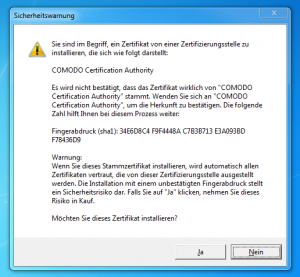 If users click, they begin an “installation process” that starts with a popup of suspicious root certificate. This official-looking certificate — apparently issued by COMODO — gives the issuers unlimited permission to make changes on the system, move freely past the firewall and circumvent the already installed AV.

As of March 3, the installed malware was a banking Trojan that steals credentials and financial information. However, the precise link or new variants can be added by the cybercriminals at short notice. The current banking Trojans are covered by Avira detections.