Skip to Main Content
Home
Blog
How often should I scan my PC for malware?

How often should I scan my PC for malware?

Routine maintenance is important for your teeth, beard, and yes, your computer. We grow up having the frequency of some routine measures drilled into our brains: Brush your teeth after every meal, shower once a day, and trim fingernails when needed.

In our online lives, the routine care steps are less definite: Regularly have your antivirus scan the device for malware or install those patches and updates as soon as possible. These guidelines still leave unanswered how frequent is “regularly.”

Scan through the treasures in quarantine

While looking at my child’s computer antivirus, I was surprised to find nearly a hundred malware and PUA samples safely quarantined. And, this was before I started any system scan on my own. This made me wonder if I was skipping some important steps in the general security setup of his computer? 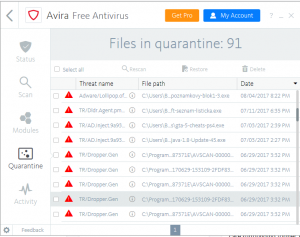 It’s not the size, it’s the frequency

The question “how often should I scan my device with the antivirus” was relayed to the experts at Avira for their opinion. In addition, I also asked them a quality question. “If an antivirus is any good, why is a scan needed at all?”

The answer came back quickly. “Repeated scans are always recommended. We recommend once per week,” said Fabian Sanz, security researcher at Avira. “In fact, there is a default scheduled scan active in all Avira versions that is set for once every week.” 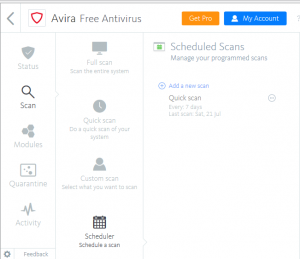 Threats at the zero-day level

There is a strong logic for regular scanning. In one possible scenario, points out Fabian, malware is downloaded but not executed. Because the malware is some new type that has never been seen, there is no detection for it yet and the file remains on the system – quite rare, but it can happen. A few hours later comes a VDF update, containing the newly created detection for this file.

“If the malware is not active – you’ve never executed it – it will remain on your system as real-time protection reacts on file execution, such as when the file is moved to a different folder or copied,” he explained. “You could say that ‘it’s vision is based on movement.’ The system scan, on the other hand, will find it, as it directly looks at each file.”

Now we know: Once a week is great – and this is also the default setting. Now just make sure you – or those in your family network – are not working on the computer while logged in as the administrator and that all your patches are updated. If only the rest of life was as simple as malware protection.