Skip to Main Content
Home
Blog
How is the COVID-19 pandemic reshaping our digital habits? A look at the United States

How is the COVID-19 pandemic reshaping our digital habits? A look at the United States

Life as we know it has changed and we all need to do things differently. Spend more time at home. Redesign our living space to accommodate work. Meet our friends and family online. The COVID-19 pandemic made us rely on our devices even more than before. To understand how life changed and the impact of the pandemic on our digital habits, Avira surveyed a representative sample of citizens in 4 nations: France, Italy, Germany and the United States. We present our findings on Americans’ digital habits and new device usage patterns, as well as the cybersecurity threats associated with the new digitalized way of living.

How did the pandemic change the way we interact with devices?

A majority of Americans (52.9%) believe that nothing changed in their interaction with digital devices during the coronavirus pandemic. However, when asked to reflect on the time spent using PCs or mobile devices, the answers clearly show an increase in usage. At a time of heightened isolation, the need for human relations and the ability to meet that need via technology has either changed or reinforced certain trends in what we use our devices for. Overall, changes in the interaction with the mobile and smartphone were experienced by 23.5% of respondents while only 16.8% reported similar changes in the interaction with their PC. 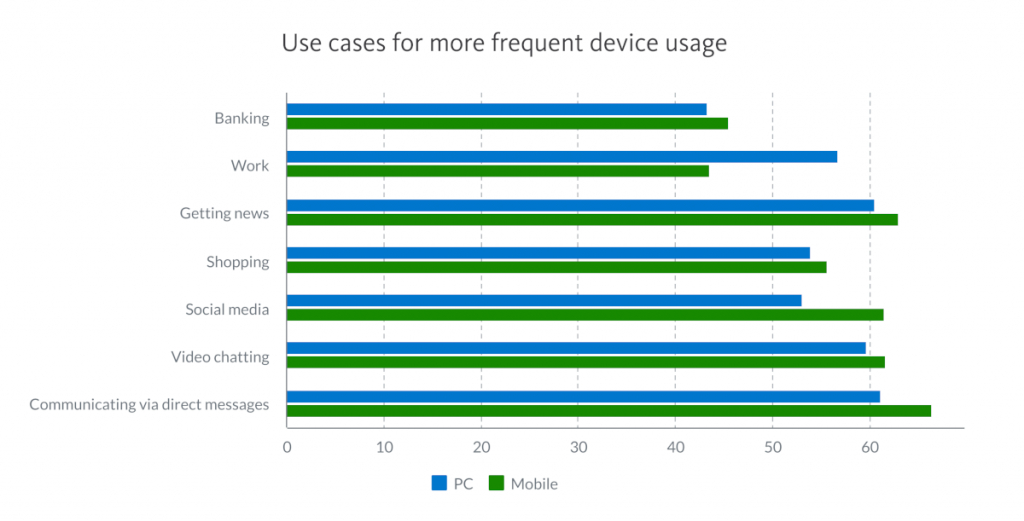 Americans used laptops (70.1%) and mobile devices (71.7%) more frequently, mainly for direct messaging, video chatting, connecting through social media, and reading news online. A month after the World Health Organization declared COVID-19 a pandemic, Americans’ screen time increased by 56 minutes per day, according to RescueTime. The use of communication and networking apps grew significantly, and many of the industry’s underdogs, such as Houseparty, Discord, Nextdoor, gained more users. Following our survey, 67.0% of the 25-34 use more their mobile for video chatting.

Messaging and video chat apps became a target for cybercriminals. From trolls looking to disrupt Zoom calls just for fun, a practice known as zoombombing, to phishing attacks through messaging apps, cyberthreats grew significantly. Privacy is also at risk, as not all apps offer end-to-end encryption for securing messages. You can find out more about security features of messaging apps in this article.

Protect all your devices with Avira Free Security

Which groups experienced the biggest change?

The IT industry reported the highest impact on device usage; over 85% of respondents reported a change in their use of not only smartphones and computers, but smart watches, fitness trackers, and their smart homes. The least impacted were the food industry and the government sector, with 56.1% and 55.4% indicating the pandemic had no impact on device usage.

Of those users whose device usage changed during the pandemic, 70.1% indicated using their PC more frequently. Although the trend is particularly pronounced among women, who used laptops at a higher rate than men (76.6% vs. 66.2%), there are certain niche areas where the increase in PC usage among men was more pronounced: for work (60.4% vs. 50.8%), and banking (48.8% vs. 34.4%).

When asked about the different uses for their PCs, Americans emphasized communication: 61.2% were using it for emails and 59.3% for video chats. The trend for the latter was weaker among the younger (18-24) and older (55+) age groups. The second major use for PCs was information: 60.6% used their PCs for following the news and 53.1% for following social media.

How did the pandemic impact smartphone usage?

Social distancing led to an increase in smartphone usage in comparison to the period prior. Due to the COVID-19 pandemic, approximately 71.4% of respondents said they used their mobile phones more frequently. The largest increase overall was seen in the 35-44 age group, with 72.4% more participants using their smartphones. 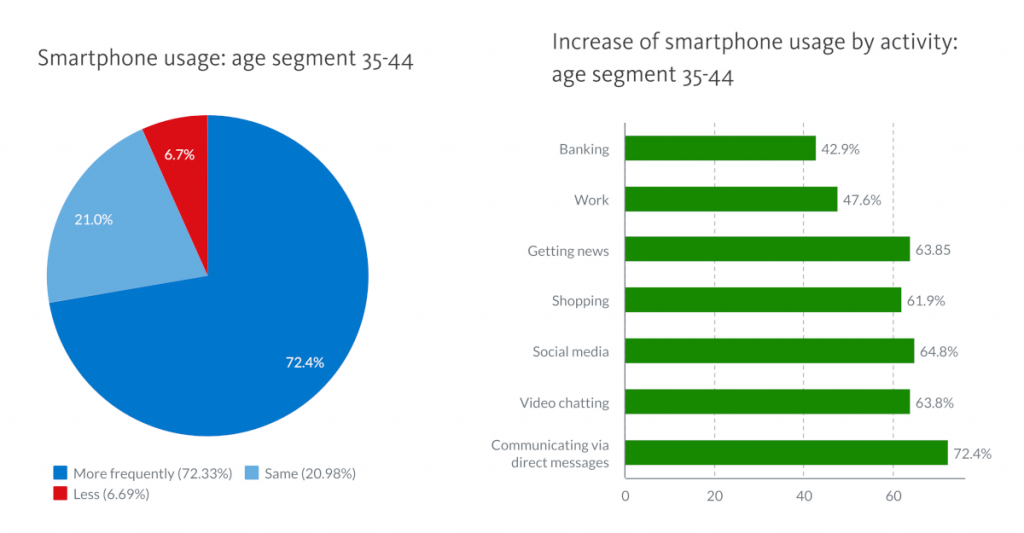 When asked about different types of uses for their mobile phone, the results of the survey clearly show how all age segments use their smart devices to communicate. 66.4% of participants saying they used the smartphone more often to communicate via direct messages, while 61.7% of respondents use it more for video chatting. Among other popular purposes of using the mobile phone, such as shopping, work or banking, the ones related to communication collected the highest score.

At the same time, older age segments tend to be more informed during the pandemic. A significant increase can be noticed within the 55+ age group for using mobile phones more to follow the news, where 72.2% of participants said they used the smartphone more often than before the lockdown. This is the only case where this age group, on mobile, saw a larger growth than the average age groups.

Life in lockdown: How do Americans plan on improving their digital life?

The pandemic forced us to radically change our lifestyle, form new routines and had a significant impact on our professional lives. Looking ahead, Avira asked the respondents what additional technology, if anything, would they buy or wish to buy to be better prepared for future lockdowns or work-from-home/learn-from-home scenarios. 66.4% of Americans said that would make a purchase. The top priority to improve their home setup would be a new computer (26.8%), mobile phone (23.1%), tablet (22.4%) and Smart TV (20.7%). 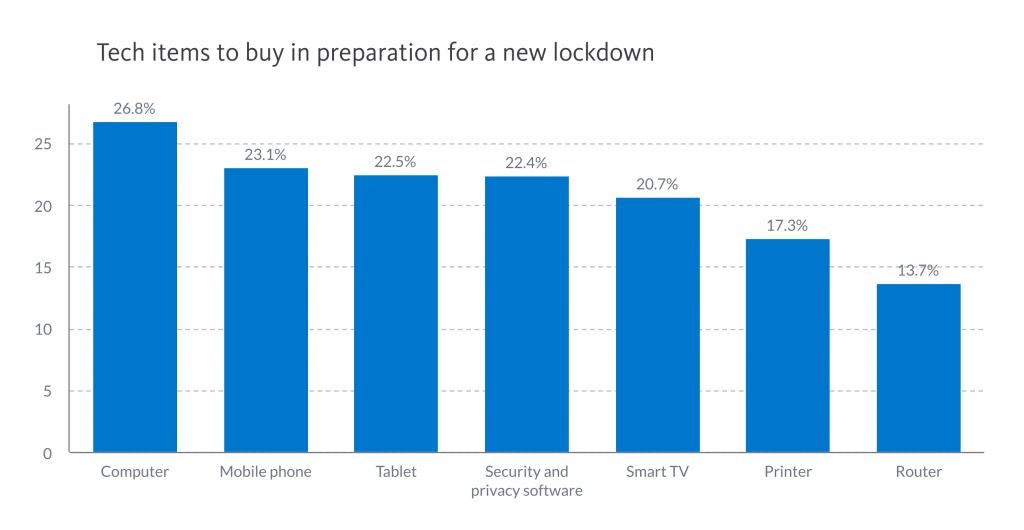 At the same time, it is worth mentioning that even though people made important purchases, only 24.0% of participants who improved their home environment invested in security and privacy. Cybercriminals have recognized the opportunity presented by users working in less secure environments and adapted their attacks accordingly. In the first six months of 2020, Avira detected and blocked a total of 639,061,218 malicious events. Avira’s 2020 midyear malware threat report shows an increase of 74% in script malware, 36% more adware detections, and 30% more MS Office and script-based attacks.

Leor Nadison
Leor is a copywriter and content marketer for Avira.