Google makes data tracking personal (unless you say no)

Google has torn down the Chinese walls that separated the operations of its DoubleClick data tracker and its own Google apps. As a result, Google can compile a detailed record of your online activities across synced devices, glean details from your emails, and tag it with your email address and other personal identifiable information — and then use this to sell advertisements. These changes took place during the summer with the changes in the terms and conditions for existing users – and were the default settings for new users.

If you just clicked through the changes, these changes probably escaped your attention. However, a journalist at ProPublica went through the changed terms carefully to uncover what had been added and removed and wrote a detailed article on the results.

These midsummer night’s changes are a major step back from Google’s goal after it purchased DoubleClick in 2007. Back then, privacy was to be a major goal when it came to launching new advertising schemes. According to ProPublica, for years Google kept the massive trove of data collected by its own Google apps and that collected by DoubleClick in separate silos. But that was then and time – and Google – have changed.

You think you’ve been anonymous?

On one hand, the move just lets Google play catch-up to Facebook when it comes to collecting personalized information on its users. Facebook has already been tracking users for years, linking names to activities, and even tracking where those little “like” buttons have gone – even when users did not click on them.

But on the other hand, the Google change blows away that idea that data trackers and brokers have been just developing anonymous data bases that could simply help advertisers make better, more granular ads. Nope, these databases can now have lots of your personal detailed information – including your name and email address in them. Since virtually everyone in the western world with an Android smartphone has a Google Account, Google is the 800 pound gorilla when it comes to online privacy – they can sit where they want to.

It’s a fair bet to say that Google remembers your activities and where you have been better than you do. However, you can tweak the setting in your Google Account. To do so, go to Activity control and uncheck the box as shown below: 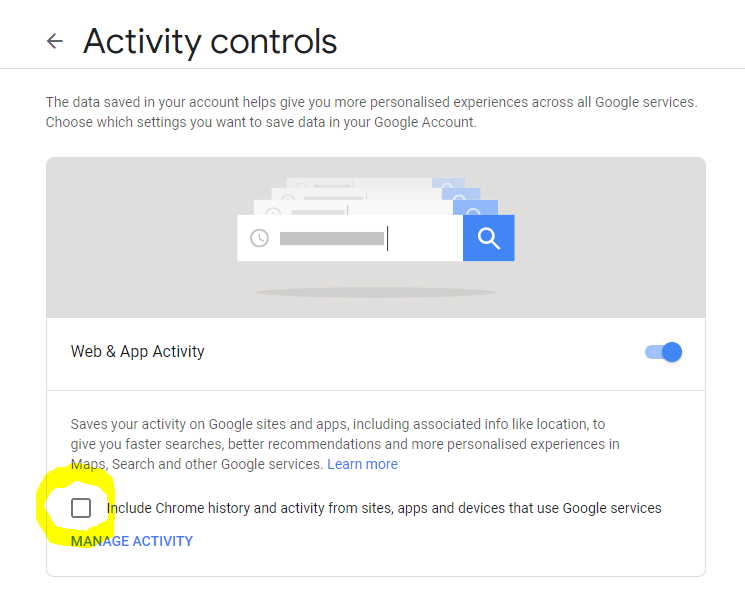 That will probably – but not definitively – will enhance your privacy. Since you have already fallen down the rabbit hole – take a look around at the types of information you are still sending Google. And, your privacy tweaks work only if Google plays by their own rules. They have come under fire for tracking people even when the location feature was turned off. Happy unchecking.