Keep your drivers up to date without taxing your PC

Drivers have access to your entire Windows PC, which makes them malware targets – as it was the case with keyloggers hiding within audio drivers on laptops. Such attacks are often based on software vulnerabilities which should be patched as soon as an update becomes available. However, with most vendors this does not happen automatically.

The recent Meltdown and Spectre vulnerabilities – endangering all devices with Intel and AMD CPUs – made it clear – it’s critically important to keep both hardware and software fully updated to stay ahead of the latest zero-day threats and exploit kits. The newly enhanced Avira Software Updater Pro does just that, automatically installing the latest updates that can protect you against these vulnerabilities. It gives you the one-click ability to update all hardware drivers and software running on your Windows device. The result is a more secure and better performing device with less effort spent on your side.

Did you close that window?

Software and driver updaters – along with a certified antivirus app – are a key element in insuring your online security and privacy. While an antivirus software functions as a house alarm – stopping intruders and alerting you to their presence, an updater does the essential job of double checking to see if all doors are locked and windows latched. When something is left half-open due to a newly uncovered security issue – it pulls in the needed update to close that window of vulnerability before a cybercriminal can exploit it.

If you think it is complicated enough to close the home windows and turn off the iron before heading out, think about the potential issues in your computer. The average device has around 70 apps and potentially hundreds of drivers – all of which should be regularly – and easily updated.

Drivers are bits of software that enable hardware on your device such as camera or printer to communicate with the operating system. Outdated drivers can result in poor and unstable device performance like computer freezes, blue screens of death, printer malfunctions, poor connectivity, and jittery mouse movements – and a variety of security vulnerabilities. 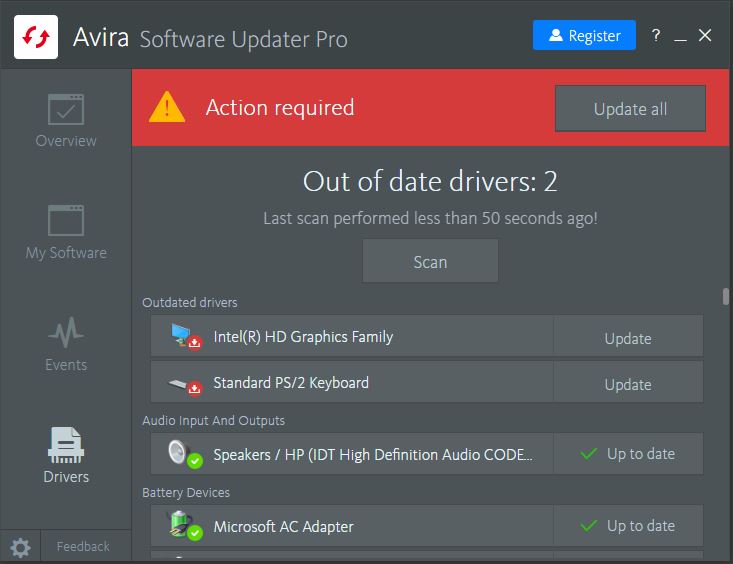 The new driver updater feature is directly integrated into the Avira Software Updater. Just click on the user interface and it will scan your computer hardware for needed patches. To install the selected updates, simply hit the “Update all” button. The Avira Software Updater covers a broad range of hardware drivers for processors, printers, cameras, loudspeakers, keyboards, monitors, microphones, the mouse and other devices.

We’ll close it for you – easy peasy

Avira Updater Pro provides you with “one click” automatic updates to your drivers and software, making it easier to be fully patched and updated. From the start, Avira Software Updater Pro detects and notifies you of any issues with outdated software programs, the operating system, or drivers on your PC or laptop. Users can install updates with just one click – silently downloading and installing the latest software versions. It’s your choice what software and drivers can be automatically updated – the Avira Software Updater looks for updates from over 150 different apps and programs and supports an unlimited number of drivers, so you don’t have to. 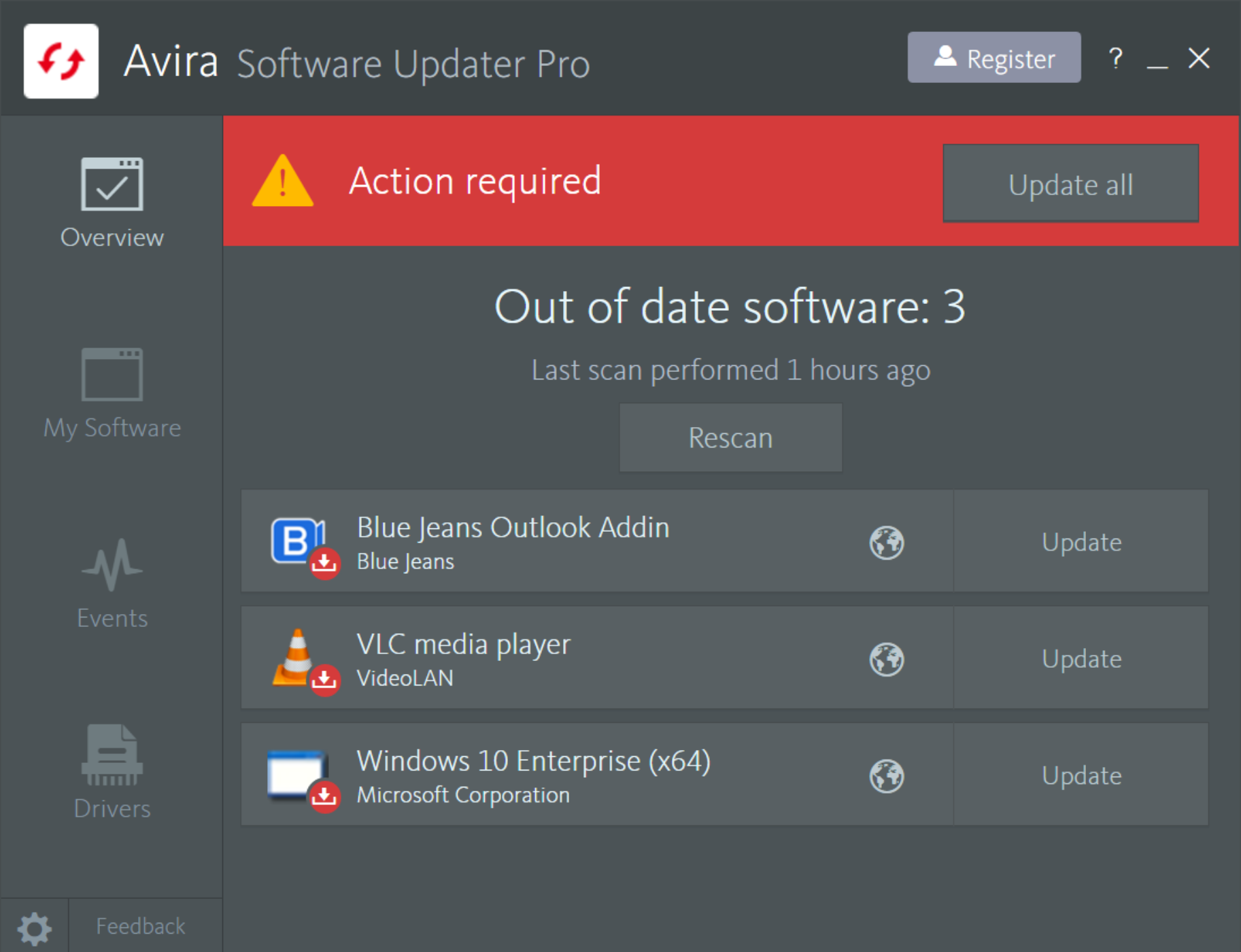 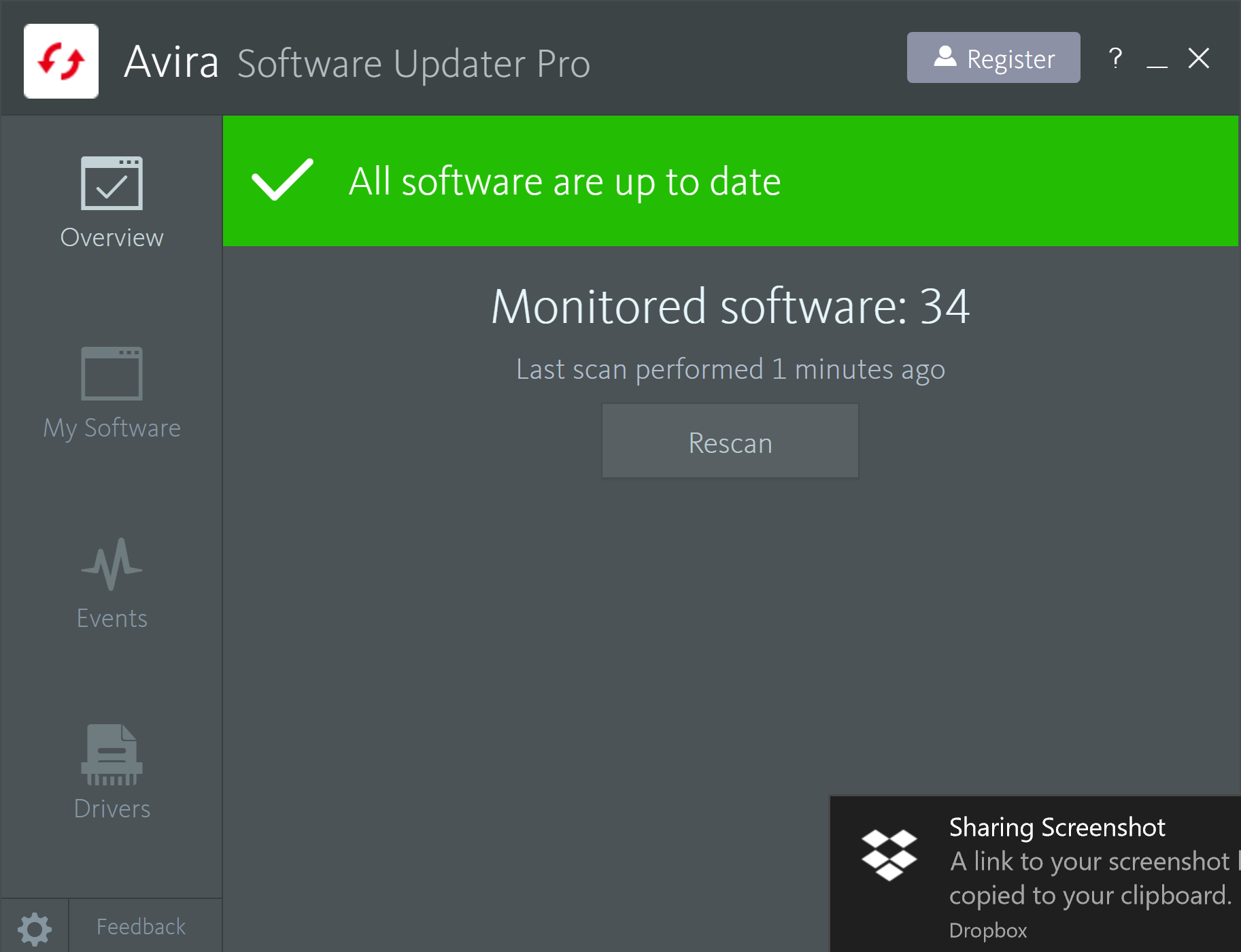