Gaming is fun, but the cost can be substantial. Thanks to the ever rising hardware requirements of new games and the emergence of new technologies like VR (virtual reality) a new PC is needed every couple of years. While a new machine is a great thing, it’s also a significant expenditure. Instead of just plunking down the money why not squeeze better performance out of your existing machine and give yourself more time to save for that next generation gaming beast?

Since its emergence in the 1950s as a fringe phenomenon, gaming has gone mainstream. From Atari ST or Commodore 64 back in the beginning to retro consoles such as the Nintendo Famicom and finally the PC with its ever evolving hardware:  The majority of households nowadays include at least one gamer. Statistics range from those saying  60% of U.S. households have at least one person regularly playing video games to others stating that 42% of Americans are gamers. Either way, it’s a big business – and a huge conflict between a gamer wanting the ultimate machine and those other family budgetary priorities.

Avira Game Booster is there to solve this conflict. With just a single press of a button, users can get a better gaming experience out of their machine. By closing background applications and unnecessary services as well as optimizing network settings, Game Booster ensures a smooth gaming experience. 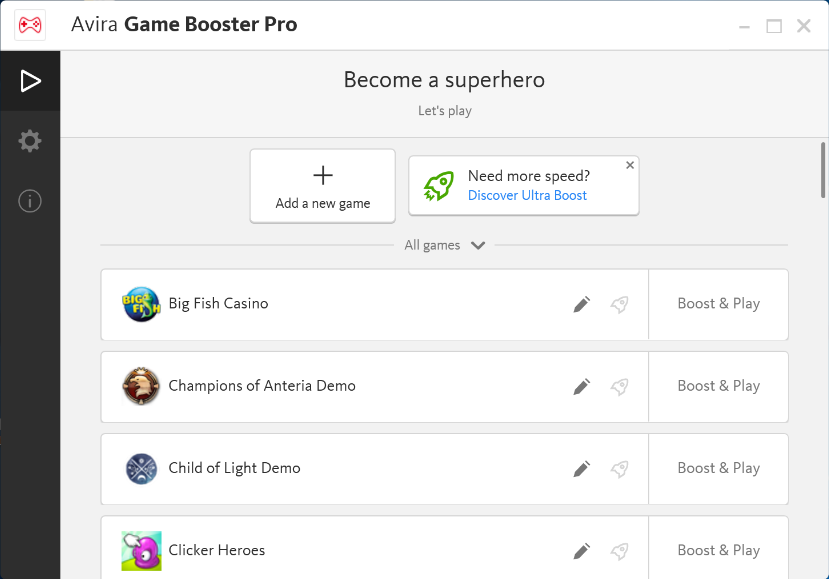 How Game Booster works its magic

Game Booster is part of the acclaimed Avira System Speedup. Once a user has decided on their choice of game, performance is a couple clicks away. The user simply starts Game Booster via the control panel, adds the chosen game, and then clicks “Boost and Play”. The selected game will remain in Game Booster’s list for the user’s convenience. 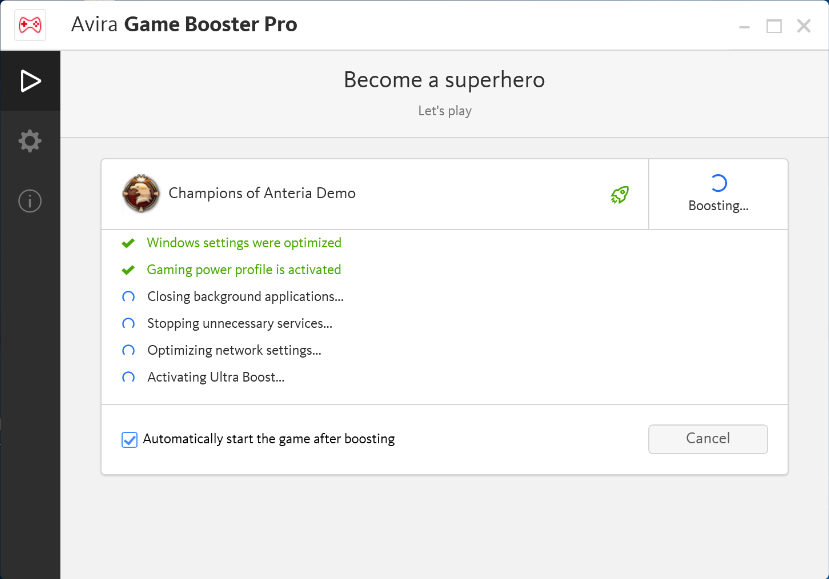 Game Booster starts working its magic as soon as the game has been started. This includes closing unneeded background applications and services (for example, Microsoft Office and other business apps) to free up valuable processing power and RAM. Apps can also be whitelisted to stay open.

To further improve loading times, users can choose Ultra Boost. This paid feature creates a virtual drive in the RAM to create an extra performance boost. Once the game is closed the PC will be restored to its previous state, restoring closed programs and removing the virtual drive.

Play games like they are meant to be played

Battlefield 1 lag, GTA 5 stuttering, and The Witcher 3 FPS drops might just be solved by the extra power one can achieve with Game Booster. So why not use the boost and make sure even the most performance hungry games will start up faster and run smoother?

The ultimate gaming experience is just one click away – get it now! Avira Game Booster is available as part of Avira System Speedup and both the free and premium version can be downloaded from the Avira website.