Finally, after eight nerve-wrecking qualifiers, we have all of the finalists for our Avira FIFA17 Contest. What’s next you ask? The Grand Finale of course, in which the players will fight for a total prize pool of 2000€! Don’t miss out on the action and tune in tonight:

We hope you’ll enjoy the game and wish our finalists all the best. 🙂

It’s been some time since we’ve last talked about eSports, but a good thing takes time.

Now: For those of you who don’t know what eSports is, let me explain. eSports is short for ‘electronic sports’ and is the term for competitive video gaming. It’s exactly what you probably think it is by now: Two gamers sitting in front of their PCs, playing games against each other. So far, so good. But eSports is more: It’s professional gamers sitting in front of their PCs, playing live before an audience of several thousand spectators, competing for a huge prize pool. eSport players are becoming almost as famous as the ‘real’ sport stars with fans screaming their names and them giving autographs. The latest huge tournament, the League of Legends World Championship finale in Berlin, Germany, sold out their 17,000 tickets in just 90 seconds. You find this unbelievable? Then take a look at this video.

How can I participate?

With this out of the way let’s get to the good part: We are sponsoring an eSports tournament! The game? FIFA17. Now – if you want to participate head over to the tournament registration page @ time2win. Make sure to also read the rules before you sign up. 😉 There will be eight qualifiers so you’ll have ample chance of unleashing the eSports star in you, make sure you secure one of the first 4 places and thereby qualify for the grand finale. With a total prize pool of 2000€ it should definitely be worth your time. Yes, you’ve heard right: 2000€! 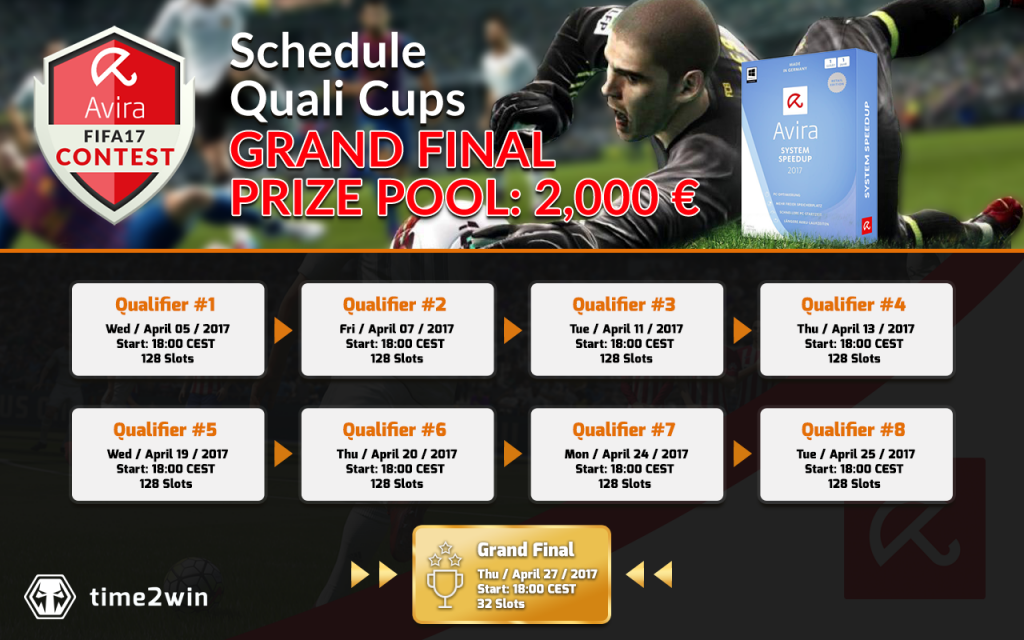 In case you don’t want to participate but still feel like following the event we have good news: All of them will be streamed on Twitch.tv. Take a look at the schedule below as well as the different streamers in order to not miss any minute!