Published today, the test performed by Independent Testing Lab AV-Comparatives includes all major AV-Vendors and most of our competitors, each of them bringing to the table updated versions of their Antivirus solutions.

The great news is that Avira barely missed any malware sample, as you may see in the graph below. False Positives weren’t an issue either, making it easy for us to win yet another Advanced+ Award for our Avira Antivirus Pro. 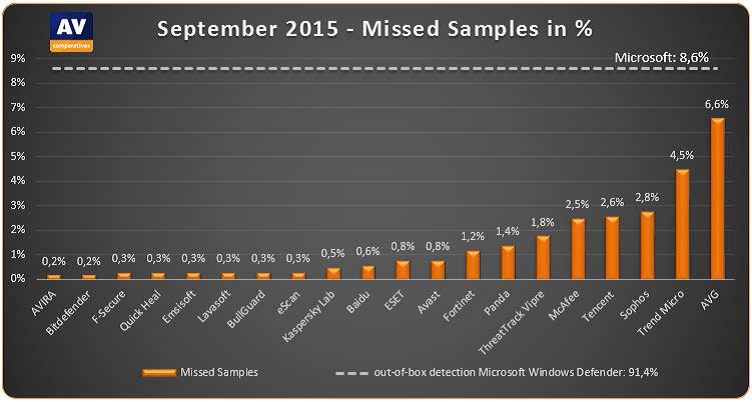 Wonder why this test is so important for us and our users? Because it stands as one more proof (if ever needed) that we’re really great at what we do. Actually, we’re better than great. Being the best at detecting malicious files on any Windows systems it’s what recommends us as the best protection for your PC.

According to AV-Comparatives representatives, the malware sets were frozen on the 24th August 2015 and consisted of not less than 166624 malware samples. All products had Internet/cloud-access during the test, were last updated on the 1st of September 2015 and tested under Microsoft Windows 10. They were tested using default settings and have been enabled to perform scans of all files, scans of archives and scans for PUA in all products.

In order to include only recent discovered malware currently threatening users’ devices, testers have built the test-set after consulting Microsoft’s telemetry data. As they state in the final report, the distribution of families in the test-set has been weighted based on family-prevalence: the more prevalent a malware family is, the more samples from that family are included in the test-set.

It’s not really our first time!

The September test brought us an Advanced+ award for our Avira Antivirus Pro solution and showed the world once again how great our product actually is when confronted with the world’s most dangerous cyber-threats. The great results also confirm the high level of protection offered by our products, as it’s the second time this year we manage to master one of the toughest tests in the Industry. The March edition of the AV-Comparatives “File Detection Test of Malicious Software” had already come to the same conclusion: Avira offers the best antivirus protection for your PC.