Article 13 in the EU’s new copyright legislation could turn YouTube back to black, with European viewers getting a blocked content message instead of those videos that they really, really want to see. To hear Susan Wojcicki, CEO of YouTube talk about it, if the EU comes down too hard on them as the enforcer of all copyright infringement – they might just have to pull the plug on all of their viewers in the EU.

The issue, as Ms. Wojcicki points out, is that Article 13 places the responsibility squarely on publishing platforms such as YouTube to police content as it is uploaded to prevent the unauthorized distribution of copyrighted materials. Failure to do so can result in massive fines for the platform. The problem, as she also points out, is that this policeman function is teetering on the edge of impossibility. Given that more than 400 hours of video are uploaded to YouTube every minute – this places a huge burden on content platforms such as YouTube – and it simply might be easier for them to block out the EU user base.

We’ve been down that blocking road

YouTube and the German copyrights organization Gesellschaft für musikalische Aufführungs- und mechanische Vervielfältigungsrechte (GEMA) have already had years of court battles between them over what content can be streamed online and what should be paid for this content. While this dispute was essentially settled in 2016, it resulted in years of restrictions on video content within Germany as well as restrictions on what could be streamed outside of the country at times. 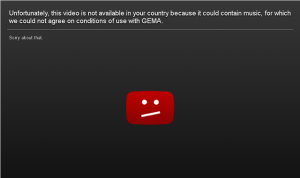 Viewers got used to seeing the skewed red face and the black background when they wanted to watch restricted content. At one time, the German-based MyVideo web hosting site reported that Germany blocked 61.5% of the most popular videos as opposed to the 0.9% in the United States and over 1% in Switzerland. This policy probably fueled use of VPNs in Germany as people worked to mask their GEO-IP and to circumvent these restrictions.

YouTube has built up a huge apparatus for identifying copyrighted content called Content ID. This is what does the vast majority – 98% – of the footwork for flagging suspect content. However, Ms. Wojcicki is sure that this is not going to be enough given their EU-mandated role as the Upload Police. The fragmented and messy layers of copyrights within a single work are complicated. She mentioned the hit Despacito as an example given its mix of sound recording and publishing rights – and with some rights holders still unknown. Her approach in a nutshell: “With the proposed legislation as is, we might have to pull the plug on the video until these rights issues get solved. As is, we still paid out €800m to EU content owners last year.”  Her blog post is really a cry for a kinder, more gentle upload filter than a protest against the entire idea. 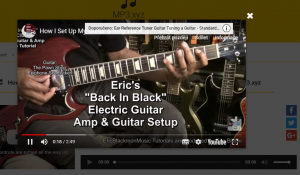 For those about to rock — we will bill you

Defining infringement is a tricky thing. Just take the rock band AC-DC for example. In addition to the official AC-DC channel, there are a variety of other posts which do everything from replay the top hits to lessons on how to play all of those power riffs.It is a question how or if YouTube should be sorting these out. Is teaching a chord sequence fair use? The courts seem to be shifting away from the YouTube interpretation of things. According to mid 2018 Vienna court decision, YouTube is not simply a neutral host provider — they curate the content, make suggestions for viewers, and analyze viewing habits. So they should be responsible for what is uploaded and not just claim that the users did it all. 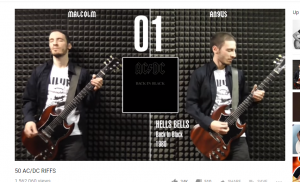 Will Article 13 kill the internet — or merely result in increased revenue for content creators and owners? Time will tell. Julia Reda, an European Parliament MP has created a long list of problems to the legislation ranging from limiting freedom of expression (death of the meme), mandating automated surveillance, to being a startup killer as new companies aren’t likely to have the expertise and deep pockets needed to develop such a content filter. Of course, YouTube could always decide to license its Content ID approach to for the greater good of society and of copyright holders.