The well known OpenSSL library, Apple’s Secure Transport, and Microsoft’s Secure Channel (which is impacting all supported versions of Windows) have all been found vulnerable to this type of attack. 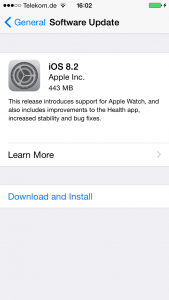 The flaw resides in the fact that the SSL/TLS encryption was forced to use a weaker cipher suite (so called “export grade”) with a 512-bit key that could be broken with today’s technology in a few hours.

Apple is describing the affected area as a “Secure Transport vulnerability which allows an attacker with a privileged network position to intercept SSL/TLS connections”.

The iOS 8.2 is available for iPhone 4s and later, iPod touch (5th generation) and later, and iPad 2 and later.

What should you do?

For the iOS, Apple patched bugs in CoreTelephony, which caused the device to restart and buffer overflows in iCloud Keychain which allow an attacker with a privileged network position to execute arbitrary code.

Even if CVE-2015-1067 also known as FREAK is more theoretical than most vulnerabilities affecting the SSL protocol and its implementations (Heartbleed, Poodle), it is strongly advisable to apply the update.

Usually, the update comes over the wire, so follow the known procedures for each device to apply it: